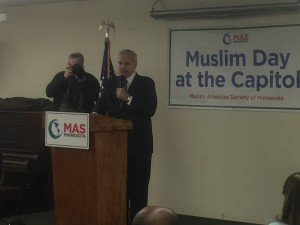 It is Muslim Day at the Minnesota Capitol and Governor Mark Dayton told community leaders that candidates for high office are making the most un-American statements.  Dayton sparked applause saying, “Too many people nod their head, but too many other people say, well, it’s just normal political discourse. Well, it’s not, and it shouldn’t be.”  Minnesota Republican Party Chairman Keith Downey told Minnesota Muslim leaders, “It is important to oppose Donald Trump’s or any other proposal to combat terrorism in a way that would threaten freedom of religion.”  But he also asked Muslim leaders to respond by affirming they support the Constitution and “specifically renounce any attempt to replace our constitutional system with Sharia law.”