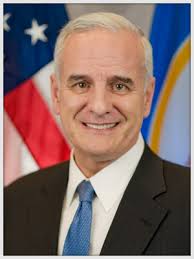 Governor Mark Dayton does not like a bill moving through the Republican-controlled legislature that would override sick leave ordinances in Minneapolis and Saint Paul, plus pre-empt cities from enacting minimum wages higher than in state law. Dayton says it’s premature to talk about whether he’d veto the bill, but he did say, “It’s not about 850 different cities in Minnesota passing their own different statutes. This is about the business community trying to keep wages down in Minnneapolis and St. Paul.”

Cam Winton with the Minnesota Chamber of Commerce disagrees.  Winton says the bill will avoid a patchwork of laws and “make sure that Minnesota’s employers can play by uniform rules across the state.”   Minnesota Grocers Association President Jamie Pfuhl supports the pre-emption bill saying, “Our member companies proudly offer a wide range of benefits to meet the needs of the work force and the very competitive nature of the job marketplace.”

Hearings on the controversial bill have been heavily attended, with opponents often outnumbering supporters.