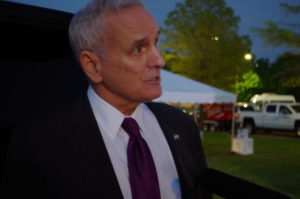 Governor Mark Dayton as promised vetoed the rest of Republicans’ state budget bills Monday night and the two sides resume negotiations Tuesday morning with one week remaining in the legislative session. The governor says he’ll make an offer that’s a “very significant departure” from the budget he proposed in January and will include “serious cuts, very serious cuts, that are difficult and painful.”  And is Dayton moving closer to Republicans on tax cuts?  “We’re going up a bit to their number,” he says.  “That’s really more their priority but, yes, we plugged in a higher… number than I had had before.”

Prior to  talks breaking off last week, Republicans criticized Dayton’s offers as steps too small for the legislature to finish on time. The governor says about the offer he’ll make today, “This is a mega-step, and I hope it’s recognized as such.”

As Senate Republicans passed the last of their budget bills Monday afternoon, anticipating the governor’s veto Majority Leader Paul Gazelka said, “We did our job in passing a balanced budget, getting that before the governor. That wasn’t good enough, so we’re gonna roll up our sleeves.”

Among the casualties of Governor Dayton’s Monday night vetoes is a bill to fund roads, bridges and transit — something lawmakers have been trying to agree on for years. This latest attempt falls far short of what’s needed, contends Minneapolis Democrat Scott Dibble.  He says, “This bill doesn’t even get there by half. This bill doesn’t even get there by a quarter.”  But Hutchinson Republican Scott Newman says there’s something in the bill for every area of the state, be it rural, suburbs or city.  Newman adds, “For purposes of this year, I sincerely believe that this is the best that we can do under the circumstances handed to us.”  Democrats contend the only way to raise enough money to address Minnesota’s long term transportation needs is a gas tax increase. Republicans strongly oppose it.