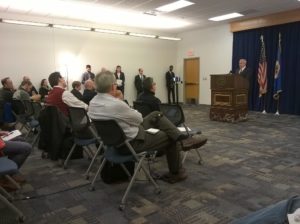 Governor Mark Dayton is telling legislative leaders he wants to make a decision by Monday whether to call a special session to address rising health insurance premiums. It comes the day after top Republicans in the Minnesota House proposed assistance for 2017 based on income — but there’s a sticking point:  “We need to scrap MNsure,” says Preston Representative Greg Davids. “It’s just a duplicative bureaucracy that’s costing hundreds of millions of dollars.”  Moving to the federal exchange will likely face opposition from Governor Mark Dayton and other Democrats. Davids says he’s trying to compromise by keeping some oversight in Minnesota.   But another question is, what will happen to the federal option if President-elect Donald Trump makes good on his pledge to dismantle Obamacare?

Dayton proposed the state provide a 25-percent health insurance premium reduction in 2017 to those who don’t qualify for federal tax credits.   He’s critical of Republicans’ plan to base premium reductions on income, saying such a program would take more time to develop and it’s uncertain whether insurance companies could implement it.  In a letter to top Republicans, Dayton says “continuing to throw out other undeveloped and unvetted possibilities, appears to me to be a pretext for not taking action.”

When asked today about the likelihood of a special session, Dayton said, quote, “Got a coin?”