You are here: Home / Sports / Goydos wins in Minnesota

BLAINE, Minn. – Entering the final round of the 2017 3M Championship deadlocked at 14-under par, Paul Goydos and Gene Sauers each fired a final-round 66 Sunday to remain tied after 54 holes before Goydos two-putted the first playoff hole to collect his fifth-career PGA Tour Champions victory. 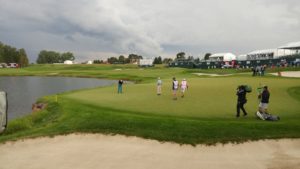 Since joining the 50-and-over tour in 2014, Goydos has earned at least one win in each of his first three seasons, with his last coming at the Charles Schwab Cup Championship last season. For his efforts this week at TPC Twin Cities, Goydos takes home a check for $262,500.

“That champagne went down nice,” Goydos said Sunday. “I’ve won five times out here and I’m surprised by all five. This was the first Champions Tour event that I ever played in 2014, so my fourth time here. This event is a community event—you see the same people all the time, which is nice, and 3M does a great job, there are big crowds out here, the golf course is in great shape—it’s a fun place to come.

Playing bogey-free the final 36 holes of the tournament, Goydos used just 20 putts during his second round to shoot a tournament-record 12-under par 60 Saturday.

“I can’t remember faster greens on the Champions Tour than we played this week,” Goydos said. “They rolled great, but they were quick. My speed had been good with the putter, especially on the weekend.”

After rolling in a 10-foot birdie at the first Sunday, Goydos hit a 9-iron to 15 feet at the third and sank his putt to keep pace with Sauers, who birdied his first two to start the final round Sunday.

“That putt I ever so slightly misread it, I didn’t hit as good a putt as I did on No. 1,” Goydos said of his birdie putt at the third. “It goes back to the concept of good things are happening. Those are positives—you’re not going to hit every shot perfect or read every green right and you’re going to have little miscues.

“I consider myself a reasonably nervous player. That’s good, the last thing I want to be is not nervous. That tends to get you into the round really quickly. Gene making birdie does too, so it’s a nice way to start the day.”

Goydos used a 9-iron to put his approach inside of five feet at the par-5 fifth to take the outright lead over Sauers, but Sauers came charging back with birdies at the sixth and seven to move ahead of Goydos. Converting his birdie from eight feet at the 10th, Goydos pulled even with Sauers before regaining the lead with a 25-foot bender at the 11th.

Sauers answered on the ensuing hole with a birdie as the two would remain deadlocked at 19-under going to the final hole.

“Yesterday’s round allowed me to have a little bit of a cushion. That’s the whole concept of playing in the last group and having the lead, is that you don’t need to shoot the lowest score the last day to win the golf tournament. Gene and I had built a [cushion] in the first 11 holes today where we could make some pars.”

Goydos’ lag putt from 70 feet rolled within inches of the cup and he tapped in for a birdie get to 20-under for the championship before Sauers two-putted for birdie as well, rolling in a tester from six feet to force a playoff.

In the playoff, Sauers’ second at the par-5 18th found the water short of the green before Goydos thinned a 4-iron, landing two feet clear of the water and rolled 30 feet from the flag. He would lag his eagle putt within three feet for a tap-in birdie for the victory.

“I thought I hit enough club and carry by more than it did—that may have been a function of the heavier air and the coolness,” Goydos said of his approach at 18 in the playoff. “I thought it was over when I hit it. It’s a tough spot—if I think back, I might even hit one more club to be safe.”

The final round was stopped at 4:32 p.m. Sunday for an hour and three minutes as inclement weather moved into the area while the final group was on the 14th hole.

“I think the rain delay hurt me a little bit, I was kind of on a roll there for a while,” Sauers said after the final round Sunday. “I think it tightened me up a bit and maybe more nerves. I played good and just have to look forward to next week.”

Kenny Perry also shared the lead with Goydos and Sauers entering Sunday’s final round, shooting a pair of 65’s during the first two rounds, but struggled on the back nine all week. He finished the championship with a 2-under par 70 on the final day.

Perry notches his fifth top-10 finish of the season, finishing tied for seventh Sunday with Marco Dawson, Wes Short Jr. and Duffy Waldorf at 16-under par 200.

“What killed me was on six. I had like 235 front, 250 to the hole and had a hybrid. I’ve been hitting my hybrid great all year and I hit about a foot behind it and chunked it right into the lake and made bogey on a hole I should be making birdie, Perry said. “That really stunned me, I just never really got going after that.

The final round was highlighted by Minnesotan John Harris’ hole-in-one at the 196-yard eighth hole with a 5-iron, the 12th in tournament history. Harris finished the championship at even par 216.