Iowa running back Akrum Wadley broke off a 54-yard touchdown run with 5:28 left and Iowa hung on to beat Minnesota 14-7 on Saturday.

Wadley had 14 carries for 107 yards for the Hawkeyes (4-2, 2-1 Big Ten), who matched the program record with their eighth straight road. 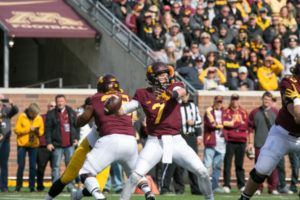 Mitch Leidner completed 13 of 33 passes for 166 yards and was also picked off twice for the Gophers (3-2, 0-2), who were flagged for eight penalties for 58 yards and forced to punt nine times. After Wadley’s score, LeShun Daniels Jr. ran in the 2-point conversion. Leidner threw his second interception on the following possession, but the Gophers got the ball back again with no timeouts and 86 seconds remaining.

Brian Smith’s leaping catch out of bounds at the 13-yard line put them in position to tie the game, but Leidner’s fourth-down throw to Smith on a fade route in the corner of the end zone fell short.

Shannon Brooks gave Minnesota a 7-6 lead midway through the third quarter with a 9-yard run.

Beathard’s streak with a touchdown pass in nine straight games was stopped.

Gopher coach Tracy Claeys says they lost the physical battle in this one:

IOWA: Kept alive their hopes of winning the West Division again, recovering from the homecoming loss to Northwestern the week before with a performance that was good enough to win even if it wasn’t pretty.

MINNESOTA: Totaled 86 points in the last two games against Iowa, the most in a two-year span against the Hawkeyes since 1936-37, but they struggled all afternoon to sustain drives, let alone score. Leidner didn’t complete a pass until less than 4 1/2 minutes were left in the first half, and he threw into double coverage at the Iowa 35 later on that possession and was intercepted by Manny Rugamba.

IOWA: Travels to face Purdue, where they’ve won three times in a row and haven’t lost since 2007.

MINNESOTA: Play at Maryland, the first regular season game between the two teams.