You are here: Home / Sports / Hawks Down Wild

(St. Paul, MN)  —  Minnesota fell 5-3 against Chicago on Tuesday night in front of a sellout crowd of 19,333 at Xcel Energy Center. Chicago captain Jonathan Towes scored his fourth career hat trick in the win and accounted for five points.  Wild forward Mikael Granlund scored twice for Minnesota while LW Zach Parise also netted a goal. G Devan Dubnyk made 34 saves for the Wild; Corey Crawford had 29 for Chicago.  After its five-day NHL break, Minnesota will conclude its franchise record eight-game homestand against Los Angeles on Monday, Feb. 27 at 7 p.m. CT.

Toews says it was just one of those nights offensively:

Bob Kurtz with the call Tuesday night on the Minnesota Wild Radio Network of the final goal in a 5-3 loss to Chicago.

Minnesota played in its 700th all-time game at Xcel Energy Center, including preseason and playoff games, in front of the largest crowd of the season. The Wild holds a 21-8-1 record at Xcel Energy Center, ranking T-3rd in the NHL in wins and T-4th in points (43). Minnesota has outscored its opponents 103-63 on home ice, including 26 power-play goals. The Wild has netted 15 PPG in the last 14 games in Saint Paul. Minnesota leads the league with a 30.6 home power-play percentage (26-for-85) and ranks second in PPG scored.

The Wild moves to a 39-14-6 record in 59 games this season, ranking T-1st in the league in wins and second points (84) – just one point shy of tying Washington who has one game in hand. Minnesota is one win shy of reaching the 40-win milestone for the seventh time in franchise history. The Wild has posted points in 18 of its last 23 games (16-5-2). Minnesota moves to 24-9-5 against Western Conference opponents this season, earning points in 10 of its last 14 games against the West (9-4-1).

C Mikael Granlund scored two power-play goals for Minnesota, tying the team lead for most PPG netted in a single game this season (Niederreiter, 11/25 & 1/19). The center has netted a power-play goal in back-to-back contests (3) and four in the last five games. He has recorded at least one point in 17 of his last 20 games, totaling 24 points (9-15=24) since Jan. 12. The Finnish native owns 55 points (19-36=55) in 59 contests this season, already setting career highs in goals, PPG (6), assists, points and multi-point games (14). He leads the team in scoring, assists and multi-point games and is T-1st in goals. He also ranks T-9th in the NHL in assists and 12th in points. 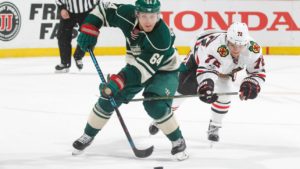 RW Nino Niederreiter tallied two assists for his seventh career multi-assist game. He owns nine points (4-5=9) in the last eight contests and 21 points (10-11=21) in the last 20 games. The winger sets a career high with 45 points (19-26=45) in 59 games this season, already setting career bests in assists and PPG (8). He ranks T-3rdin the NHL in goals and T-7th in points since Jan. 12. He leads the Wild in PPG, points and hits (94) and T-1st in goals. His 45 points rank eighth amongst all-time active Swiss-born players in a single-season.