You are here: Home / Sports / Hunter is ready to star for Vikings 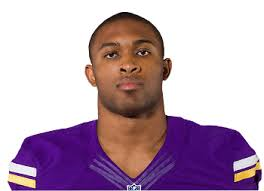 In an atmosphere of constant turnover in the chase for fresher, cheaper NFL talent, age can be as much of an asset as size, smarts, speed and strength.

Danielle Hunter was quite the addition to the Minnesota Vikings last year. Not only did he rank second among all rookies with six sacks, taking full advantage of a part-time role, but Hunter was the youngest player in the league.

”I use it as an advantage,” said Hunter, who won’t turn 22 until Oct. 29. ”There’s guys still older than me who’ve been drafted this year.”

Becoming a fixture as an extra pass rusher in the nickel package, Hunter shined down the stretch with one sack in each of the last three games in December.

”Coaches told me to do this, and I went to go do it,” Hunter said.

That sense of duty, focus and respect helped establish the third-round draft pick as perhaps the most welcomed addition to the Vikings last season. The veterans on the defensive line, a position group often filled with the most alpha males, were quick to embrace the quiet kid from LSU.

Born in Jamaica, Hunter immigrated to the U.S. at age 8 and was raised in the Houston area. He declared for the draft after his junior year, bringing some rawness that contributed to him being a second-day selection.

The Vikings, relying more on analytical data and projection in their scouting in recent seasons, identified Hunter as a high-ceiling prospect who was well worth an early-round pick. His 6-foot-5, 252-pound frame has a 34-plus-inch wing span, and his 4.57-second time in the 40-yard dash at the NFL combine was the best in 2015 among defensive linemen.

”Oh man, he can be outstanding. Like I tell him, I wish I was so humble,” Vikings defensive end Everson Griffen said. ”He’s a player that listens to all the information. You could tell him to run a mile around the track because it’s good for you, and he’s going to run it.”

Hunter has been lining up next to fellow defensive end Brian Robison in some situations during training camp, and coach Mike Zimmer will surely continue to find ways to play his best pass rushers – Griffen, Robison, Hunter and outside linebacker Anthony Barr – at the same time. Robison, who’s 33 and in his 10th year, could soon find Hunter taking his job as the every-down regular at their position.

The Vikings have at least put together a championship-level defense, with experienced players like Griffen, Robison and defensive tackle Linval Joseph fronting a wealth of under-25 potential stars. Hunter is in that group.