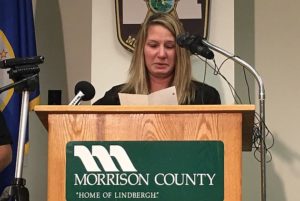 Thanks to MNN Affiliate WJON: http://www.wjon.com

The death of a hunter in Morrison County last month is now considered a homicide.

Sheriff Shawn Larsen says investigators are also looking for a gun believed to have been stolen during the incident. Terrence Brisk was found dead on Monday, November 7th.

Preliminary autopsy results from the Ramsey County Medical Examiner concluded Brisk died from blood loss resulting from a gunshot wound.  Brisk’s body was found in a wooded area on his parent’s property northwest of the intersection of Hawthorne Road and Jewel Road in Belle Prairie Township, east of Little Falls. Larsen says they believe the shooting happened between 2:25 p.m. and 4:20 p.m. on November 7th.

Brisk’s widow spoke at a news conference in Little Falls Wednesday afternoon. Pam Brisk says its been difficult for her and her family since her husband was killed.

The Sheriff’s Office, with the help of the Bureau of Criminal Apprehension, have followed up on several leads and conducted multiple interviews. The homicide determination is based on information gathered so far in the investigation.

The Sheriff’s Office is asking for your help to find a Winchester Model AE 30-30 lever action rifle belonging to Brisk. It is described as an older model, with a wooden stock and forearm, with no sling action. Brisk was known to carry the rifle in the woods while hunting and at this point it has not been found.

Larsen says they knew all along that the gun was missing, even though they just revealed that information Wednesday.

Gun similar to the one they are looking for, photo courtesy of the Morrison County Sheriff’s Office

There’s also a $20,000 reward for information that leads to the identification of the person who shot and killed Brisk.

Larsen says they’ve interviewed a number of hunters and landowners in the past month. 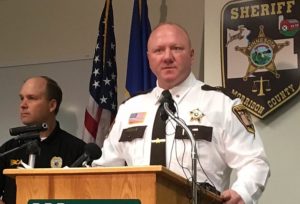