You are here: Home / Sports / Huskies charge back from three-goal deficit to beat Gophers 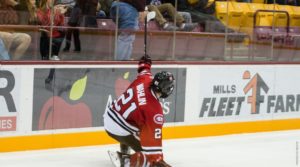 Wahlin put in the power play game winner at 2:53 of the OT session on assists from rookie defenders Jack Ahcan and Dennis Cholowski.  These were the first career points for Ahcan and Cholowski and it was Wahlin’s second goal of the season for the Huskies.

The goal capped a four-goal comeback for the Huskies, who trailed 5-2 heading into the second half of the third period.  This marked the first time since a win at UAA on Nov. 30, 2012 that the Huskies were able to come back from a three goal deficit to win a game.

The victory was also SCSU’s first of the 2016-17 season and it extends SCSU winning streak at Mariucci Arena to three consecutive games.

In the first period, Minnesota scored the game’s first goal at 12:10 on an even-strength goal by Vinni Lettieri.  He was assisted on the play by Leon Bristedt and Rem Pitlick.

The goal was assisted by Patrick Newell and Robby Jackson.  This was Schuldt’s first goal of the season and his 11th career marker at SCSU.  The assists were also the first points of the year for Jackson and Newell.

The Gophers padded their lead to 3-1 with a power play goal at 9:19 of the second period with a goal by Leon Bristedt, which included assists from Lettieri and Pitlick.  To complete the period’s scoring for UM, Mike Szmatula added another power play goal at 14:39 with helpers from Sheehy and Justin Kloos.

The Huskies got back into the action at 17:11 of the second period with Judd Peterson’s second goal of the new season.  He was assisted on the play by Jake Wahlin.  This was Wahlin first assist as a college player.

In third period, Minnesota made it 5-2 with an even-strength goal by 2:34 by Tommy Novak.  He was assisted on the goal by Sheehy and Jake Bischoff.

Once again, the Huskies got back into the mix at 10:23 of the third period with a goal by Jacob Benson.  Assists on the goal were charted by Daniel Tedesco and Ben Storm.  This was Benson’s first goal of the season and his fifth career goal at SCSU.  The assist was Tedesco’s first of 2016-17 and this was Storm’s second of the year.

SCSU closed the gap to one with a power play marker by Mikey Eyssimont at 13:59.  He was assisted on the play that came from the left side by Jackson and Newell.  This was Eyssimont’s first goal of the season and SCSU’s second PPG of the evening and they were the second assists of the game for Newell and Jackson.

In the closing minutes of play, SCSU pulled its goalie and it met with positive results as Peterson marked his second goal of the night at 18:47.  This was his third goal of the season and the extra attacker goal was assisted by Blake Winiecki and Newell.  The assist was Newell’s third of the night.

The goal forced the OT session where Wahlin brought home the win for SCSU.

In the game, SCSU outshot the Gophers 40-35.  On the power play, SCSU was 3-6 and UM was 2-5.  Rookie goalie Zach Driscoll was the goalie of record for SCSU in relief of starter Jeff Smith.  Driscoll had two saves in 19:18 of play, while Smith made 27 saves and allowed five goals in 42:34 of play.  Eric Schierhorn had 34 saves for the Gophers.

SCSU will continue its 2016-17 season on Oct. 22 with game two of the Minnesota series at the Herb Brooks National Hockey Center in St. Cloud, Minn.  Game time is slated for 7:07 p.m.