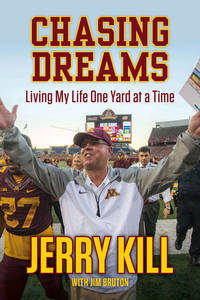 Former University of Minnesota football coach Jerry Kill is back in town this week promoting his new book “Chasing Dreams.”  Kill retired from coaching last year in the middle of the Golden Gopher season.  He has since taken an administrative job within the athletic department at Kansas State, working closely with the football program there, but not in a coaching role.  On Thursday, Jerry Kill sat down with Minnesota News Network sports director Mike Grimm, who is also the radio voice of Golden Gopher football.  In the interview, Kill said he and his wife Rebecca miss the people of Minnesota.   He says he may have worked himself too hard at the University in trying to get a new practice facility approved.  Kill says he probably made a few people mad along the way because he was a such a hard driver.  Kill says his new position at K-State allows him to be on the football field at practice to observe.  And, he says he loves that the Wildcat players call him “coach.”

Jerry Kill says he has lost more than 20 pounds since leaving coaching and feels energetic.

Here is the entire conversation between Jerry Kill and Mike Grimm from the MNN Studios:

Proceeds from the book go towards two of Kill’s charity foundations.  The Chasing Dreams Foundation helps children with epilepsy in Minnesota.  And, the Jerry Kill Cancer Fund helps patients in Southern Illinois.  There are several book signings this week in the Twin Cities area.  Kill will attend this Saturday’s Golden Gopher game against Indiana State at TCF Bank Stadium.