You are here: Home / News / Justice for Castile protests continue 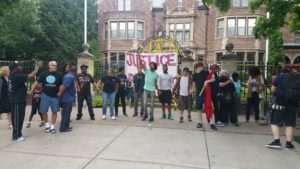 Protestors in front of Governor’s residence

Protestors plan to bring their message of justice for Philando Castile to the Ramsey County Attorney’s office today.

The group, which has demonstrated for 22 consecutive Fridays demanding justice for Jamar Clark at the Hennepin County Attorney’s office, is shifting focus today. They are calling on John Choi to prosecute the officer who shot and killed Castile during a traffic stop in Falcon Heights last week.

On Sunday, the group Black Lives Matter is planning a protest at Rosedale mall to demand the city of Falcon Heights cut its ties to the St. Anthony Police Department in the wake of Castile’s shooting.