You are here: Home / News / Klobuchar kicks off workforce tour in Greater Minnesota 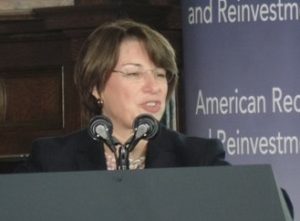 Senator Amy Klobuchar’s staff is visiting a number of northeast Minnesota communities today and tomorrow to talk with local leaders about ways to get a better match between students and jobs. Klobuchar says a lot of available jobs don’t have people to fill them.  She says, “Sometimes it’s a skills gap because people are getting degrees and trained in things where there aren’t jobs, and yet we have these open jobs in everything from welding to medicine.”  Klobuchar says one good idea is more apprenticeships. She’s co-authoring a bill to expand federal grants for partnerships between community colleges, high schools and employers.

Klobuchar says, “We’re gonna start losing business contracts out of Greater Minnesota if we don’t fill some of these jobs. And it’s not a problem we had during downturn, but it’s a problem we have now.”

Klobuchar’s staff will be in Duluth this morning, Grand Rapids and Cass Lake this afternoon,  and Bemidji, Hibbing and Pequot Lakes on Wednesday.  Klobuchar says her workforce tour will continue in the future with stops all over the state.