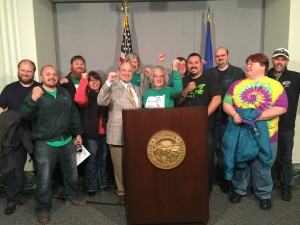 Labor leaders are at the State Capitol today, urging House Republicans to release details of their bonding proposal with barely a week remaining in the legislative session. AFSCME Council Five head Eliot Seide says it’s not surprising Republicans want a leaner bonding bill than Democrats — but he says it’s time for House Speaker Kurt Daudt to release specifics of a 600-million-dollar plan he’s talked about.  Seide says, “If he continues to keep the details a secret, it’s impossible to negotiate a reasonable, bipartisan compromise.”  Daudt responds transportation must come first.  “If transportation and roads and bridges are really our number-one priority, you kind of need to decide how much of that 900-million [dollar] surplus you want to put towards your number-one priority.”  Governor Mark Dayton promises a proposal Monday to try to break the deadlock.