You are here: Home / News / Latest numbers show slow recovery in shipments through Port of Duluth/Superior 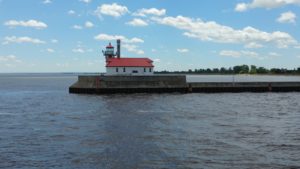 “Cautiously optimistic” say officials as the latest numbers show a slow recovery in shipments through the port of Duluth/Superior after a tough season last year. Seaway Port Authority’s Adele Yorde says a bright spot is grain, with shipments 18 percent ahead of last year.  She says, “We’re all hoping that the anecdotal, if you have a strong August you should have a strong fall, we’re hoping that that holds true for the fall.”  Yorde says through July, iron ore shipments were about two percent ahead of last year, and they’re hoping those numbers hold.

Yorde says the outlook is promising because five of the six large producers on the Iron Range are back up and running.  But she notes that half the mines on the Range are still idled.

Yorde says through July 14.4 million tons of commodities and cargo had gone through the port.  She says with a typical shipping season seeing 33 to 34 million tons, they’re “halfway home.”  Total product shipped through Duluth/Superior so far in 2016 is about seven percent below last year, and about 11 percent below the long-term average.

There’s much more information in this interview with MNN’s Bill Werner: