1. Minnesota welcomes Purdue to TCF Bank Stadium for a Saturday afternoon tilt. The Gophers are 36-32-3 (30-12-3 at home) all-time against Purdue and have won three straight games in the series. The three-game winning streak is the longest in the series for Minnesota, which it has accomplished six times. Last year, the Gophers scored 28 points in the third quarter to pull away from Purdue on the road and notch a 41-13 win. Minnesota was led by running back Shannon Brooks, who rushed 17 times for 176 yards and scored one touchdown. Quarterback Mitch Leidner also tossed two touchdowns to tight end Brandon Lingen.

3. Minnesota beat Illinois 40-17 to earn its sixth win of the season and become bowl eligible for the fifth straight season. The Gophers will play in their 19th bowl game at the end of the season. They snapped a seven-game bowl losing streak last season by beating Central Michigan 21-14 in the Quick Lane Bowl. Minnesota’s streak of five consecutive bowls (2012-present) is tied for the longest streak in program history. The Gophers also played in five straight bowl games from 2002-2006. 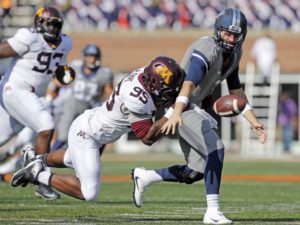 4. Minnesota is tied with Ohio State for the Big Ten lead (fourth in the nation) in turnover margin at +10. The Gophers have made seven interceptions this year and recovered 11 fumbles, while throwing five interceptions and losing three fumbles. The Gophers have capitalized on this good fortune as well, as they have scored 69 points off of turnovers, while allowing only 16. Last season, Minnesota scored only 37 points off of turnovers, while allowing 72.

5. Minnesota averages 32.1 points per game (ranks 48th in the nation and fifth in the Big Ten) and has scored at least 30 points in its six victories (scored 30 points in only two wins last season). The last time Minnesota scored 30 points or more in six games in one season was 2007. The Gopher offense has taken considerable strides under first-year offensive coordinator Jay Johnson. Minnesota averaged 22.5 points per game last season, which ranked 106th in the nation and 13th in the Big Ten. Minnesota’s current offense is its most productive since the team averaged 35.8 points in 12 games in 2005. In the previous five seasons, Minnesota’s best offense was in 2014, when it averaged 28.4 points to rank 66th (ranked 85th or lower in other four seasons before Johnson joined the staff). 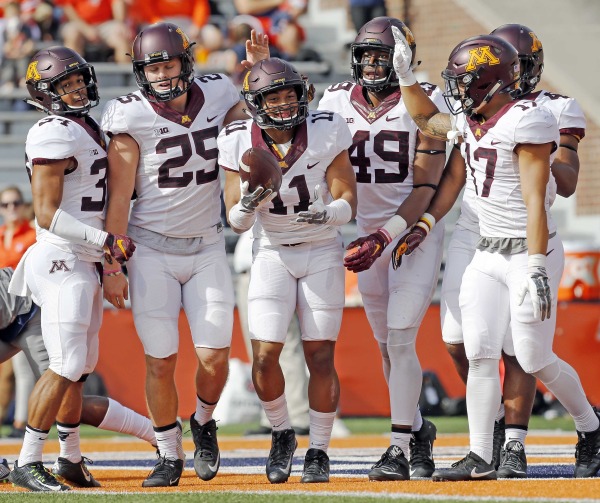