You are here: Home / News / Lonsdale shop owner: “Muslims Get Out” sign is staying up 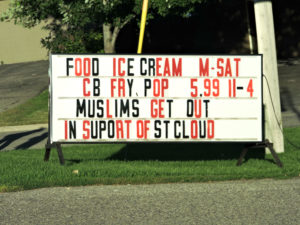 Dan Ruedinger, the owner of Treats Family Restaurant in Lonsdale, says he’s not taking down his “Muslims Get Out” sign.

That’s after he met Tuesday with Jaylani Hussein, head of the Minnesota chapter of the Council on American-Islamic Relations (CAIR-MN). Hussein invited Ruedinger to visit a mosque, but Ruedinger declined. Ruedinger says “according to [Hussein], they do not support the radical ones or or any of the ones that are doing these horrific crimes against Americans and on American soil, so with him saying that, I said, “okay, my issue isn’t with you and there’s no point in me coming to your Mosque.”

Ruedinger says he’s been overwhelmed by attention he’s gotten from the sign, but is fed up with radical extremist Muslims and acts of terror. He says “we’ve got to take our country back.”

Ruedinger says the message only applies to radical extremist Muslims who commit acts of terror. Asked if he’s considered changing the sign to reflect that, Ruedinger responds:

Ruedinger says business has been difficult to keep up with since he put up the sign.