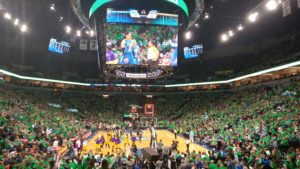 (Courtesy Minnesota Lynx)  —  In one of the best basketball games ever to be played in the Playoffs, the Los Angeles Sparks hit a shot in the final seconds to win the 2016 WNBA Championship.  Throughout an intense, physical and emotional game, LA’s persistence on the glass and their ability to make shots clutch shots down the stretch gave them a slight edge over the defending League Champs.

League veteran and walking Hall-of-Famer Candace Parker played her heart out on Thursday evening and led all scorers with 28 points on 12-for-22 shooting, as well as notching 12 rebounds, three assists and a block. Nneka Ogwumike, who struggled with foul trouble in the first half, tallied 12 points and rebounds, and a steal, block and assist.

“I think I’m excited because we won a championship, but the journey to get here, I wouldn’t have wanted to do it with anybody else, with any other team, any other coaches,” Parker said. “It’s amazing when you surround yourself with great people how fun it is and how exciting it is when you get what you want.”

“You think about the different playoff format that they implemented this year, and you couldn’t have a better series with the two top teams in the regular season competing against each other going through a five-game series, competing at the highest level,” Augustus said. “We always talk about great players making great plays. Throughout the five games, you saw people rise to the occasion. Any given night there was any given player that could be the most important piece at that time. This was what we needed, and I hope that we gained a lot of fans from around the world, around this country, and they really recognize how well women’s basketball is being played here in the USA.”

8: Going into the game, if there was one category in which Minnesota needed to dominate in order to win the game, many people would have said rebounding. Well unfortunately for the home team, LA was able to muster this many more offensive rebounds on the night, which helped lead to a 33-27 rebounding edge in the game.

“It takes hustle plays to win championships on the road, and they made hustle plays,” Lynx head coach Cheryl Reeve said.

14: The Sparks outscored the Lynx 49-42 in the second half thanks to some high percentage shooting. LA put up this many more points in the paint than Minnesota did, leading to their efficient shooting in the final 20 minutes of the ball game.

“I was really impressed with our poise down the stretch because we got up nine, and that lead evaporated in a hurry, and then it went back and forth, and we continually made plays,” Sparks head coach Brian Agler said. “Much better poise tonight than in Game 4.”

19,423: In front of one of the most intense and passionate crowds to ever attend a sporting event, this many people crammed into the Target Center to witness history.

“What a great atmosphere,” Reeve said. “I’ve got to commend our fan base for providing us an atmosphere all season long to create this home-court advantage that we had that we couldn’t capitalize on. But certainly it’s not because they didn’t bring it. Our business staff also — I don’t know, 18,000 tee shirts, green tee shirts on every seat, the commitment, like I said, the fans, fully invested. The number of times that I hear from people that attend a game for the first time that they say, I had no idea how much fun it was to go watch women’s basketball.”