You are here: Home / Sports / Lynx players lead Americans past Japan in Rio 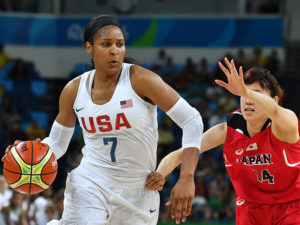 “We came into the game knowing that it was going to be almost impossible to keep them from getting open shots, that’s how good they are,” said USA head coach Geno Auriemma. “Their offense is as good as anything I’ve ever seen in terms of how quickly they move the ball, and how quickly they move themselves. I mean, they play a such a fast pace. So, we had like four or five different things that we wanted to do, and we tried a couple of them in the first half, and they didn’t go over so great and so at halftime we settled on one thing that we wanted to do defensively.

“We were unbelievable in the second half,” Auriemma added. “Remember, we were up 10. They cut it to four in the first three minutes, so in the last 17 minutes of the game, was pretty amazing. That was pretty amazing brand of basketball in that 17 minutes against a really, really good team.”

“I think it’s just a matter of us wearing teams down,” Moore said. “We play at a high level. We try to play at a high level for 40 minutes. It’s not going to happen perfectly. We just tried to do our best to stay with our game plan and be aggressive, and our defense really kick started our offense in the second half where we were able to get a lot of stops in a row and stifling runs that we were trying to make.”

The first quarter saw five lead changes before free throws from Moore, who had 12 points in the period, were followed by points from Tina Charles and Lynx player Sylvia Fowles to put the USA ahead 23-16 with 3:18 remaining. From there, each team added seven points to end the first quarter with the USA leading 30-23.

The USA started the second quarter by jumping ahead to a 12-point lead, 40-28, and Japan called a timeout 2:30 into the period. The break worked to slow the U.S., which saw Japan rally to trail by four points,  46-42, and the USA called its own timeout with 2:26 left before halftime. Japan scored again to cut the gap to two points, 46-44, but after one more basket from each team, the USA closed the first half with a run. Including a free throw from Angel McCoughtry, a 3 from Taurasi and four straight points from Lynx player Seimone Augustus, who nailed a jumper with one second remaining, the USA went to the locker room with a 56-46 advantage.

After Japan scored the first four points of the second half, Moore ignited a 14-1 run with a 3-pointer, and the USA led 70-51 when Japan called a timeout at 4:15 in the third. The Americans, however, went on to outscore Japan 11-8 over the remainder of the third quarter and led 81-59 headed into the final 10 minutes.

The USA was in high gear throughout the fourth quarter. After eight quick points from the red, white and blue, Japan again called a timeout at 7:40 with the score at 89-59. It was another 1:28 before Japan made its first of two baskets in the quarter – a 3 that made it 93-62 with 6:12 on the clock.

“There were a couple timeouts and a couple huddles where we were like, ‘We got to pick this up. This team is playing really well,’” Taurasi said. “They’re making us uncomfortable. That says a lot about this group. We’re older. We have a lot of experience. We didn’t panic and we just found a way to keep grinding it out, and it worked out for us.”

Augustus scored to push the USA into triple digits (101-62), and Hutchinson native Lindsay Whalen closed out the game with the final four points.

Four-time Olympian Sue Bird injured her right knee during the second quarter, and she will be undergoing further evaluation in the morning.