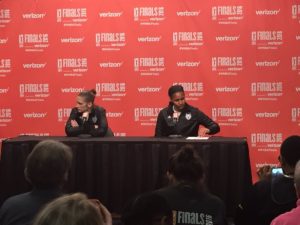 The W-N-B-A Finals are going to a decisive fifth game.  Minnesota star Maya Moore dropped in 31 points as the Lynx staved off elimination with an 85-79 win over the Sparks in Game Four in Los Angeles on Sunday night.  The best-of-five series is now tied at two games apiece.   Moore not only had 31 points in the win, but she added nine rebounds, five assists and three steals.   Hutchinson native Lindsay Whalen netted 13 points and hauled in six rebounds.  She scored four straight points during a key stretch in the fourth quarter.  Seimone Augustus added 12 points and five assists.   Sylvia Fowles had a double-double with ten points and 13 rebounds.  Chelsea Gray came off the bench for Los Angeles and scored 20 points, hitting four-of-five three-point shots in the process.  Minnesota was 24-for-27 from the free throw line, which was a key factor in the game.

Moore says they weren’t going to go down without a fight:

Moore says they fought as a team:

Moore says they couldn’t worry too much about losing Game Three:

Moore says she just worked as hard as she could:

The Lynx will host Game Five on Thursday at the Target Center.   Tickets are already on sale through the team.