You are here: Home / News / Mankato lawmaker says he’s worked to reach across the aisle this legislative session 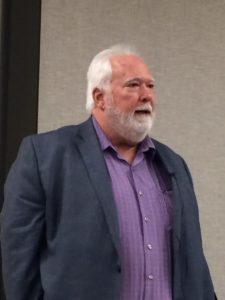 With Minnesota lawmakers back in their districts for the Easter break, a Mankato state representative is answering to claims mid-session that Republicans and Democrats are more at odds than ever before.

DFL Representative Jack Considine said, “At least one or two people have said, ‘Well, you seem to be blaming the Republicans for everything.’ I try real hard to work with Republicans.”

In fact, Considine said he’s signed on to several pieces of GOP legislation. “Somewhere between 30 and 40 Republican bills I am a coauthor on; I haven’t really kept track of the number. If I look at the bill and if I feel that it is going to be beneficial for the folks of 19-B, I’m on board,” he stated.

He points to a Republican representative who intended to introduce handicap parking legislation but was unable to get it together by deadline, so Considine said he offered to tweak a similar bill he had written in order to get it done. “Went to her and said, ‘Would you like me to do this?’ She said yes, so I did amend my bill so it covered her concerns as well as mine, and it passed,”

Considine said about 80 percent of the legislation this session has not been contentious and, “There is quite a bit of cooperation that’s going on, but when we get to these questions of values and priorities we have some differences.”

He added that Republicans have a 20-vote majority in the state house, which means that essentially every bill taken up in committee is GOP-backed legislation.

Thanks to MNN Affiliate KTOE