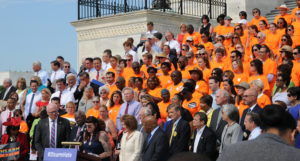 Congresswoman Betty McCollum (back row, in black) at anti-gun-violence rally in Washington DC

As the nation focuses on the fatal police shooting of a black man in Baton Rouge Louisiana, Minnesota Congresswoman Betty McCollum stood with gun violence survivors in Washington D-C, demanding the Republican-controlled U-S House vote on “no fly, no buy” legislation and comprehensive background checks.  McCollum says, “The American public needs to hear directly from the victims of gun violence how this pain remains with them.” About the Louisiana shooting, McCollum says the F-B-I and Justice Department have done the right thing by immediately opening an investigation and expects they will be thorough and fair.