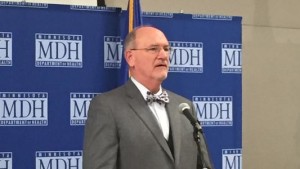 State health officials are concerned that not enough victims of sexual assault are seeking hospital care after they’ve been assaulted.

A new report from the Department of Health shows there are about 1400 males and females that seek care for sexual assault each year in Minnesota. And state Health Commissioner Dr. Ed Ehlinger says “that number has disturbingly been staying fairly constant over the last five years.”

Ehlinger estimates that as many as 70-percent of sexual assault cases are not even reported.