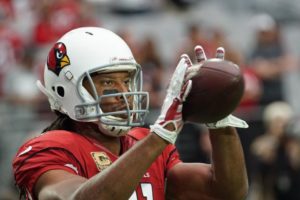 Larry Fitzgerald is a bit beat up, but that’s nothing new.

He’s taken a lot of hits in 204 NFL games. And it hasn’t mattered whether he plays wideout or in the slot, where he is now. Things get more crowded when playing as a slot receiver, but Fitzgerald said the contact is the same.

Fitzgerald had a whopping 18 targets in last Sunday’s 23-20 victory over San Francisco. Statistically, it was his best game of the season – 12 catches, 122 yards.

He played despite a sore knee and ankle. After the game, he acknowledged he’s ”felt better.”

”You don’t play 13 years without” playing with pain, Fitzgerald said after the game.

”It’s football,” he said. ”You’re going to get banged up. It’s just part of it. There’s a difference between being hurt and being injured. A lot of guys are hurting. I don’t want to name any on our team but there are guys that are playing through stuff.”

So there is no doubt that he will play Sunday when he returns to his hometown to face the Minnesota Vikings.

”He’s a well-conditioned athlete,” Cardinals offensive coordinator Harold Goodwyn said. ”He knows what it takes to be great and he does everything possible as far as getting in the training room and getting the proper rehab that he needs to be successful. So it just comes down to individual want-to. The guy loves football so he’s not going to let anybody take him off the grass.” 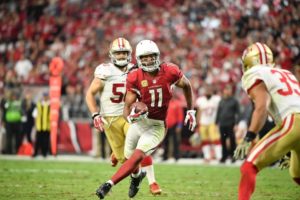 This is Fitzgerald’s fifth trip to face the Vikings. Arizona has lost the other four.

”It would bother me if I played for the Vikings (and lost every game there),” Fitzgerald joked. ”It’s not like I’ve got a big body of work there.”

Then he reeled off the names of other places where he’s never won – Buffalo, Green Bay, Pittsburgh (as a pro).

”There’s some places besides Minnesota I haven’t won,” Fitzgerald said.

Winning there would be something special, though. Fitzgerald was once a ballboy for the Vikings. He recalled several moments at big events growing up when he was asked about his memories of the late Metrodome.

Because his father was a sports writer, he got to know players and was allowed to catch fly balls before some Twins games.

”I never took it for granted,” he said. ”I was very appreciative of the opportunity.”

Fitzgerald brushed off the suggestion this might be the last time he plays in Minnesota.

”I haven’t thought about that,” he said.

But he’s 33 years old and is in his 13th NFL season. Who knows when the Cardinals will be scheduled to play at Minnesota again?
###