You are here: Home / Sports / Minnesota-Duluth advances to Frozen Four 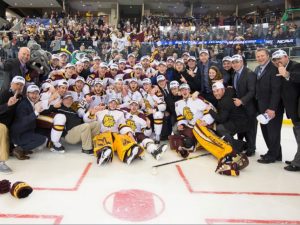 On to the Frozen Four (photo courtesy of UMD Bulldogs)

(UMD Bulldog Sports)  —  The third time is indeed the charm.

After falling in the regional title game in each of the past two seasons, the University of Minnesota Duluth finally got over the proverbial hump Saturday night.  The Bulldogs became the first team to punch its ticket to the 2017 NCAA Frozen Four by taking down Boston University 3-2 in overtime in the West Regional final in Fargo, N.D. Sophomore center Adam Johnson of Hibbing scored on the power play just 1:57 into the extra session to seal the deal as he and the Bulldogs qualified for the national championship event for the fifth time in program history — and the first time since they won it all back in 2010-11.

“I’m exited for our team and our program, but even more so for our seven seniors who have seen us suffer tough defeats in regional finals the last two years,” said UMD head coach Scott Sandelin, whose Bulldog fell 3-2 to Boston University in the 2015 Northeast Regional title game. “So to have the opportunity to go to Chicago and get to the Frozen Four is pretty exciting for all of us.

The  No.1 seeded Bulldogs, who will head to the NCAA Frozen Four (which will be held at the United Center on April 6 and 8), on a seven-game winning streak and having gone unbeaten in 18 of their last 19 outings (15-1-3). They’ll also be armed with a 27-6-7 overall record and their most regular season victories in 13 years.

Clayton Keller backhanded in a shot 7:59 into the opening period to give Boston University (24-12-3) a 1-0 lead, but UMD senior left winger Alex Iafallo answered with 17.3 seconds to go before the first intermission on a wraparound for his 19th goal of the season. Rookie right winger Joey Anderson, who picked up a pair of assists in UMD’s 3-2 overtime victory over Ohio State University  in Friday night’s semifinals, gave the Bulldogs their first lead of the evening at 11:38 of the third period when he banged in his own rebound. The 2-1 advantage held up for just a little over five minutes before Patrick Harper whistled in a wrister from the left faceoff dot. The No. 2 seeded Terriers, which need two overtimes to oust the University of North Dakota one day earlier in the West Regional opener, outshot the Bulldogs 13-7 in the third period and 24-23 on the night. The also took the final two penalties of the game, the last of which came 1:39 into sudden death which Johnson needed jus 22 seconds to capitalized on.

Adam Johnson follows through on his game-winning goal shot  “I took a one-timer and the shot got blocked,” said Johnson. “I was fortunate enough to get it back on the wall and I saw an opening. I just tried to fake a shot and get that guy to bite and shoot it by him. I found the corner and it was a good feeling.”

Freshmen Hunter Miska, who was named the West Regional Most Valuable Player, finished with 22 saves after making a career-high 40 stops one night earlier. He was joined on the six-member All-Tournament Team by Anderson as well as teammates Willie Raskob (an Northeast Regional All-Tournament Team pick in 2015) and senior Alex Iafallo. Iafallo turned his seventh straight two-point night, having assisted on Johnson’s game-winner, while extending his career-high scoring streak to 13 games.

“This is  incredible,” said Iafallo.  “The last two years we came short and this year we didn’t, so it feels absolutely phenomenal.”