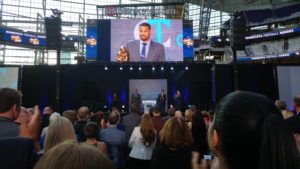 The National Football Foundation-Minnesota chapter held its tenth annual awards ceremony last night at U-S Bank Stadium.  Rochester native Mike Sherels, a former Golden Gopher linebacker and former Golden Gopher linebacker coach was given the Courage Award.  Sherels had a freak allergic reaction to medication last August and was on life support for five days, nearly dying.  He fought through surgery and returned to coaching when doctors told his family he might never coach again.  Sherels says his family and friends supported him throughout his ordeal and that helped a great deal:

Sherels is sitting this year out and could return to coaching again some time in the future.

Minnesota native Brad Nessler was given the annual Sid Hartman Media Award.  Nessler has been doing national television broadcasting of college football for more than 20 years and is currently working for C-B-S.  He is a St. Charles native and a graduate of Minnesota State-Mankato.  In addition, the 1967 Golden Gopher football team, the last Minnesota team to win a Big Ten title, was given the Legendary Team Award last night.  And, as part of the program, Vikings quarterback Sam Bradford was named his team’s offensive player of the year, while Xavier Rhodes won the team’s defensive player of the honor.  Marcus Sherels was the Vikings’ special teams player of the year, while Chad Greenway was named the Vikings’s Man of the Year for the fourth time in his career.