In unfamiliar territory in November, Minnesota has a piece of the lead in the Big Ten West and faces tough opponents in the final stretch.

Tied with Nebraska and Wisconsin atop the division at 4-2, Minnesota closes out the regular season on the road against the No. 21 Cornhuskers, hosts Northwestern and travels to the No. 7 Badgers.

Minnesota is 7-2 overall and has won four straight, with the losses coming against Penn State and Iowa. The Gophers have yet to play a ranked team. Still, win out and they’ll be in the Big Ten Championship game for the first time.

The Gophers haven’t even won a share of the Big Ten since 1967. They got close in 2014 when they went into the final game with a chance to go to the championship game, but were denied by Wisconsin.

”We’ve got a great group of seniors, and we felt like if we played well we could get to November and be in that discussion still,” Minnesota coach Tracy Claeys said Tuesday on the Big Ten coaches’ teleconference. 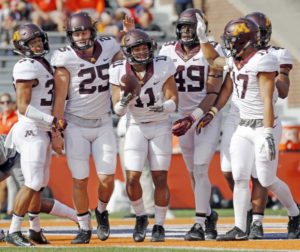 ”It makes it exciting to get into November and you still have a chance,” he said. ”I figured with the West teams playing five road games that the winner was probably going to have two losses. We burnt ours up right away in those first two, but our kids have responded and just kept fighting and winning each week.”

Armstrong was knocked out briefly during the second quarter after his head bounced off the turf while being tackled by Ohio State safety Malik Hooker. He was strapped to a backboard and taken to a hospital. He returned to the sidelines in street clothes in the third quarter.

”Tommy’s doing well, but as we all know he will go through that whole protocol (for) a head injury, and we don’t know what that means yet as far as being available for the weekend,” Nebraska coach Mike Riley said. ”It goes through the process, and we’ll go day by day with it.

”So far, it’s pretty well on track. So we’re hopeful, but we’re not for sure at all.”

Northwestern coach Pat Fitzgerald noted how the road gets tougher in November when players are getting banged up and worn down. The Wildcats (4-5, 3-3 Big Ten) dropped a 21-7 game against Wisconsin last Saturday, one week after taking Ohio State down to the final drive before losing 24-20.

”Everybody goes to November beat up mentally and physically, and it comes down to which team shows up physically, mentally and executes in November,” Fitzgerald said. ”It’s not a sexy time of the year, man, this is grind it out, get it done, and obviously we’re off to a slow start losing our last two.”

He said November is where depth often gets tested because of injuries.

”I think some schools have a few more bullets than maybe other schools, and you have to find a way just to get one more play and find a way to win,” he said.

Wisconsin coach Paul Chryst said he was proud of the players who took to Twitter on Monday to post a statement about racial injustices on campus. That message came after the game on Oct. 29 Wisconsin when a fan donned a Halloween costume depicting President Barack Obama with a noose around his neck.

The statement was shared by several black players on the team along with other black student-athletes. In part, it read: ”This incident was yet another blow and reminder that there are people in this community that may not value diverse populations.”

”We’ve got smart student-athletes and I applaud them for expressing themselves, and the way they did it,” Chryst said. ”And I think a lot of thought went into it, and it’s out of love and respect for this university. They want to make it better, and I admire them. It’s not easy, right? They could just sit back and say, `It’s not my job, it’s not my responsibility.”’
###