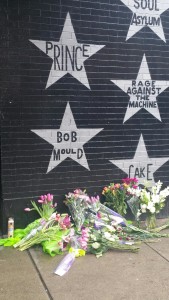 Carver County Officials and his publicist are reporting that Minnesota music icon Prince has died at age 57.

Prince Rogers Nelson (57) found dead at Paisley Park Studios in Chanhassen, MN. We are investigating the circumstances of his death. 802jk

Carver County officials have been on the scene at Prince’s recording studio, Paisley Park, in Chanhassen since shortly before 10 am this morning.  Prince Rogers Nelson was born in Minneapolis on June 7th, 1958. During his career, the music icon  sold more than 100-million records worldwide and has won seven Grammy awards. He was inducted into the Rock and Roll Hall of Fame in 2004.

The Minnesota native pop icon is deeply renowned across the state. Several lawmakers took a moment out of their day to mourn the loss of Prince.

“I wish it wasn’t true,” says State Senator Jeff Hayden from Minneapolis about the death of Prince.  “In my estimation, one of the top five artists of all time,” says Hayden.  “You can interchange him and Michael Jackson and Paul McCartney and others of that ilk, but he was just legendary.”  Hayden joins others at the State Capitol stunned by the pop icon’s death.

Rep. Keith Ellison (D-MN) released following statement after it was announced that Minneapolis native Prince has died: “My heart is heavy with the news of Prince’s passing. To the people of Minnesota, Prince was a cultural ambassador. He inspired countless others around the world with his music and theatrics. Prince showed us it was okay to be different. He showed us that the best way to be cool was to be yourself. Prince wasn’t merely a pop star – to many of us, he was much, much more. “But the world will be a little less bright without Prince in it.”

Timberwolves, Lynx reaction to Prince death. The following is a statement from Timberwolves and Lynx Owner Glen Taylor on today’s passing of music icon Prince:

“Today we lost a local icon, legend and musical innovator. Prince represented Minnesota with grace, passion and a hunger for helping others. Over the years be became a huge Minnesota Timberwolves and Minnesota Lynx fan, attending numerous games and even treating our Lynx players and staff with a private concert at Paisley Park after winning the WNBA Championship this past fall. Our thoughts are with everyone affected by this tragedy, especially the Prince family.”

Fans and music lovers across the nation are also sending their condolences.
Tweets about Prince