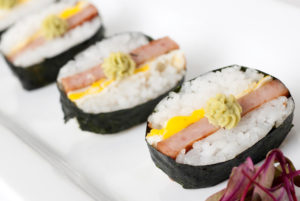 The Minnesota State Fair is out with their list of news foods for 2016.  This year’s list of  32 new menu items includes small plates, savory entrees, frozen confections, gluten free options, a handful of foods on-a-stick and several unique blends of flavor and spice.  In total, nearly 500 foods are available at 300 different concession locations throughout the fairgrounds.

At Minnesota Wine Country, located on the west side of Underwood Street between Carnes and Judson avenues

At Sushi Rolls, located in the Warner Coliseum, north side

At Gass Station Grill, located on the west side of Cooper Street between Dan Patch and Judson avenues on the outside southeast corner of the Food Building

At The Rabbit Hole, located at the Midtown Global Market booth at the International Bazaar, east wall

At French Meadow Bakery & Café, located on the north side of Carnes Avenue between Nelson and Underwood streets

At Oodles of Noodles, located in the Food Building, east wall

At Blue Moon Dine-In Theater, located on the northeast corner of Carnes Avenue and Chambers Street

At Ragin Cajun, located in The Garden, west wall

Iron Range Meat & Potatoes – A hearty portion of seasoned beef with a layer of cheddar cheese, topped with mashed potatoes, baked, and drizzled with a wild rice gravy.

At Giggles’ Campfire Grill, located on the southeast corner of Lee Avenue and Cooper Street at The North Woods

At Green Mill, located on the east side of Cooper Street, between Randall and Wright avenues, at Family Fair at Baldwin Park

Strawberry Donut Delight – A fresh glazed donut sliced in half and filled with strawberries and whipped cream – like a shortcake sandwich!

At The Strawberry Patch, located on the west side of Liggett Street between Carnes and Judson avenues

At Lamb Shoppe, located in the Food Building, east wall

At Texas Steak Out, located on the west side of Underwood Street between Lee and Randall avenues

At Hot Indian, located at the Midtown Global Market booth at the International Bazaar, east wall

At Tejas Express, located in The Garden, north wall

At The Blue Barn, located at West End Market, south of the History & Heritage Center

Saucy Shrimp & Slaw – Breaded shrimp tossed in your choice of parmesan garlic, sweet chili or buffalo sauce on a bed of fresh coleslaw.

At Fish & Chips Seafood Shoppe, at two locations: In the Food Building, northwest section, and on the west side of Liggett Street just south of Mighty Midway

At The Blue Barn, located at West End Market, south of the History & Heritage Center

Cajun Peel-N-Eat Shrimp – A half-pound of shrimp seasoned in a blend of Caribbean spices and served cold with a side of cocktail sauce.

At Café Caribe, located on the south side of Carnes Avenue between Liggett and Nelson streets

Reuben Pickle Dog – A dill pickle spear with sauerkraut and Thousand Island dressing wrapped in a slice of corned beef.

At Pickle Dog, located on the south side of Carnes Avenue between Liggett and Chambers streets

Burnt Butt Ends – Premium cuts of pork, seasoned with a BBQ rub, then smoked over oak and served with onions and jalapeños.

At RC’s BBQ, located on the north side of West Dan Patch Avenue between Liggett and Chambers streets (former site of Famous Dave’s)

At O’Gara’s at the Fair, located on the southwest corner of Dan Patch Avenue and Cosgrove Street

Beer Brat Buddies – Oktoberfest beer brat in a German pretzel bun with sauerkraut, chopped onions and a choice of mustards – a serving for two!

At Sausage Sister & Me, located in the Food Building, east wall

SPAM® Curds – Cheese-flavored SPAM® that has been cubed, battered and deep-fried, served with a side of ranch dressing.

At SPAM®, located east of Chambers Street, just south of the Grandstand

At Bridgeman’s Ice Cream, located on the northeast corner of Judson Avenue and Liggett Street

At Goertze’s Dairy Kone, located on the east side of Cooper Street next to the Merchandise Mart

Call It Breakfast – A vanilla malt or sundae topped with chunks of bakery-fresh donuts, drizzled with chocolate and latte-flavored syrups, and finished with sprinkles.

At Hamline Church Dining Hall, located on the north side of Dan Patch Avenue between Underwood and Cooper streets

At R&R Ice Cream, located on the southeast corner of Randall Avenue and Underwood Street

You can find pictures  of the new menu items by clicking below: