You are here: Home / Sports / Minnesota Timberwolves getting ready for Thursday’s NBA Draft 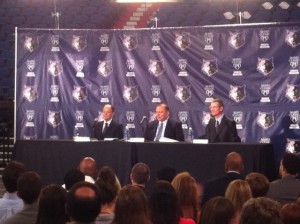 Tom Thibodeau and Scott Layden are expecting their first draft night as leaders of the Minnesota Timberwolves to be a wild one.

After taking over an up-and-coming team that has not made the playoffs in 12 years in April, Thibodeau and Layden head into Thursday night’s draft with the fifth overall pick and plenty of options available.

”The amount of attention we’re getting from other teams, for the pick, gives you an indication of how good the pick is,” Layden, the new general manager, said on Tuesday. ”So we’ll see in the next 48 hours what that means.”

Thibodeau was hired as coach and president of basketball operations to expedite what has been an interminable rebuilding process. The Wolves have not made the playoffs since 2004, but the late Flip Saunders helped stock the team with enough young talent to put them in position to end the longest active postseason drought in the NBA – provided the right moves are made this summer.

With youngsters like Karl-Anthony Towns, Andrew Wiggins, Zach LaVine and Shabazz Muhammad on the roster, one could argue that the last thing Thibodeau needs on the roster is another 19-year-old.

”Ideally, there is a balance,” Thibodeau said. ”There’s some young guys, some guys in the middle of the road and then some veterans who can contribute. I think you want a balanced roster but if a young guy proves he can play, he plays.”

Like most teams in the league, the Wolves will have plenty of salary cap room to try to add a veteran or two once free agency begins in July. But there is also no doubt that a pick as high as No. 5 would be a nice piece to package in a trade offer to land an experienced player to help augment the dynamic pups on the roster.

Add to that the number of teams that have multiple picks in the first round – Boston, Phoenix, Philadelphia and Denver – and the atmosphere should be ripe for dealing.

”I think it has the making for a fun day with teams with multiple picks,” Layden said. ”There probably will be more trade activity than usual.”

Whether the Wolves stay at 5, move down or bring in a veteran, Thibodeau said the team is prioritizing adding shooting to an athletic group that finished near the bottom of the league in 3-pointers made and attempted.

Among the players who could fit that need at 5 are Oklahoma’s Buddy Hield and Kentucky’s Jamal Murray.

”He loves Minnesota,” Kentucky coach John Calipari said in a conference call on Tuesday about Murray’s preferences. ”As a matter of fact, that’s where he’d like to go.”

Providence point guard Kris Dunn, Washington forward Marquese Chriss and power forward Dragan Bender are other names that could be considered at No. 5.

”Work ethic, intelligence, drive, all those things and putting a premium on the shooting,” Thibodeau said. ”Those are just some of the things that we’re looking at. But more importantly, how they fit in with the team.”

Thibodeau and Layden said they were also working to add to the coaching and front office staffs. They have yet to announce any new hires since coming aboard but said progress is being made on multiple fronts.

Thibodeau declined to discuss his interactions with Kevin Garnett, who is under contract next season for $8 million but has yet to disclose if he will return.

For now, Thibodeau and Layden have had their focus squarely on the draft. And their first major decision as leaders of the Wolves will come on Thursday night.

”We’ll just sort that out and figure out what the best fit is for us,” Layden said. ”But when you do have a high pick like this, in a strong, healthy draft, naturally you’ll get a fair amount of attention. We’ll sort that out and see whether it fits to make a deal, or to keep the pick and go forward with it.”