You are here: Home / Sports / Minnesota Vikings: Zimmer is “keeping it close to the vest” 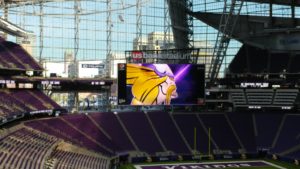 The Minnesota Vikings will try to keep the Green Bay Packers guessing about their starting quarterback this week.

Coach Mike Zimmer said Monday he has not yet decided whether Shaun Hill will stay in the lineup or be replaced by Sam Bradford on Sunday night in the long-anticipated matchup between the border-state rivals that will break in Minnesota’s new $1.1 billion stadium.

”I just figured it’d be good sports talk radio. I don’t know,” Zimmer said, adding: ”Green Bay is an awfully good team. Everybody is picking them to go to the Super Bowl. We’re just trying to be in the fight, and I’ll try to keep my cards close to the vest.”

Bradford had only seven days to prepare for the opener at Tennessee, after arriving in a trade with Philadelphia that was prompted by the season-ending injury to Teddy Bridgewater’s left knee. Vikings coaches have praised Bradford as a quick study, but the 15-year veteran Hill was the safe pick for the first week.

If they didn’t trust him to make a spot start 12 days after Bridgewater went down with a devastating injury, then there would’ve been no point in even having Hill on the roster in the first place. Hill did nothing to invalidate Zimmer’s decision, completing 18 of 33 passes for 236 yards and most importantly no turnovers during Minnesota’s 25-16 victory.

”He had poise. He never got too high or too low,” wide receiver Stefon Diggs said. ”If you noticed, he had some wheels if you saw him take off and run a little bit. I’m just happy that he is playing at a high level, and I expect that from him.”

Diggs says he has faith in both quarterbacks:

And, Diggs will do whatever it takes to get both guys ready for Sunday:

Adrian Peterson rushed for only 31 yards on 19 attempts, a product of the Titans crowding the line of scrimmage and daring Hill to beat them deep.

One-third of Hill’s completions netted more than 15 yards, and four of them (two to Adam Thielen, one to Diggs and one to Kyle Rudolph) could be qualified as long passes. The throw to Diggs, midway through the fourth quarter as the Vikings drove for the fourth field goal of the second half by Blair Walsh, gained 33 yards. That was the only one that exceeded 21 yards.

There are two reasons Zimmer and his assistants would make the switch and send Bradford out for the debut of U.S. Bank Stadium, On the big stage of the nationally televised prime-time game for the defending NFC North champion Vikings against the team best positioned to take away that title.

One: His superior arm strength ought to help the Vikings stretch the field better and, ideally, create more space in the box for Peterson to run free. Two: The Vikings gave up two draft picks for him, including their first-rounder in 2017, so the plan all along has been to start him as soon as practical.

”There’s a lot of different things going into it,” Zimmer said.

Cornerback Trae Waynes also fared well in his fill-in start after Xavier Rhodes hurt his right knee the morning of the game. Rhodes had been fighting a hamstring injury for the last few weeks, but that has healed. Rhodes said he felt a popping sensation in the knee while he was stretching and didn’t sound optimistic about being ready to face Aaron Rodgers and the Packers. He was headed for an MRI exam Monday afternoon.

”I was excited coming into the season, ready to play in the first game, and it didn’t turn out the way I wanted it to, so I was pretty upset about it,” Rhodes said.

Terence Newman started at the other outside spot, with Captain Munnerlyn in his usual role in the nickel package. Waynes will figure to take some of Newman’s playing time this year, his second in the league. The injury to Rhodes raised an extra opportunity for Waynes.

”He continues to get better. He’ll continue to get more playing time,” Zimmer said. ”So I feel good about where he’s at.”