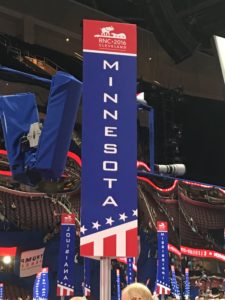 Ted Cruz not endorsing Donald Trump for president at the R-N-C last night doesn’t seem to be bothering Trump.

So says Minnesota GOP Chair Keith Downey. He says “you hope to come out of the convention 100% united, if there are some that still take some more time, I guess, so be it. But at this point in time, the media does a great job of picking one or two things that seem to be problems in their mind out and focusing on them all day long. The real mood down here is very positive.”

Downey says he’s expecting Trump to unite the party further tonight when the Republican presidential nominee addresses delegates with the theme: “Make America One Again.” And he says there’s even more disunity in the Democratic party, and we’ll likely see that on display when Dems hold their convention in Philadelphia next week.