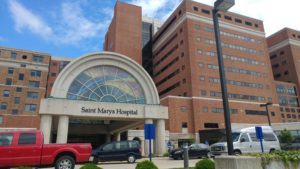 A just-released study finds Minnesota hospitals did a bit better than the national average on patient survival rates, 30 days after heart attacks and pneumonia, and the same as the national average in heart failure cases.  Mayo Clinic Hospital in Rochester performed significantly better in all categories, in the study by Minnesota Community Measurement. Park Nicollet Methodist Hospital in the Twin Cities did significantly better in pneumonia cases.

The study found 62 percent of hospitals in Minnesota, when transferring emergency room patients to another hospital, forwarded the person’s medical records within an hour.   Minnesota Community Measurement President Jim Chase says, “This is one that’s an important one for Greater Minnesota, for some of our smaller hospitals around the state, where they often need to transfer someone out of the emergency department into a hospital that’s better equipped to handle that.”  One hospital, Essentia Health in Fosston, scored 100 percent on forwarding medical records for emergency room patients. Twelve others were significantly higher than the statewide average. For details, visit mnhealthscores.org.

Chase says Minnesota hospitals were below the national average on patients who had to be readmitted within 30 days for the same condition.  He says it “seems like a small difference, just three percent lower than the national average, but when you think about how many people are in the hospital in Minnesota, that’s big news. That’s a lot of people who are not having to come back in, who might otherwise have had to.”  Four hospitals performed significantly better than the statewide average in readmissions: Mayo Clinic Hospital in Rochester, Lakeview Memorial Hospital in Stillwater, Mayo Clinic Health System in Mankato and HealthEast Woodwinds Hospital in Woodbury.

Listen to the complete interview with Jim Chase: