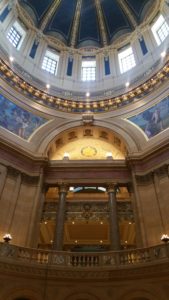 Prompted by concerns from farmers, the Minnesota House voted  106-23 Tuesday to put a moratorium for one year, until April 30th, 2018, on any restrictions on mowing ditches along state highways.  MN-DOT must also make recommendations on improving the current system for granting permits. Mazeppa Republican Steve Drazkowski says he was hoping there would actually be a change to state law because ditch mowing is useful.  He says, “Farmers out there who are basically doing the responsibility of state and local government, and that is to control the weeds, the noxious weeds, along our roadways.”

Backers of restrictions on ditch mowing say it’s necessary to preserve wildlife habitat.   But Roseau Republican Dan Fabian says he doesn’t understand why the state would want to attract wildlife, such as deer and raccoons, closer to the highway. Fabian says, “What we should be doing is enhancing the back-slopes of the ditches and the land across there, and not attracting pheasant broods closer to the highway. It makes no sense whatsoever to me.”

South Saint Paul Democrat Rick Hansen says he grew up on a farm and remembers large bales rolled up with “For Sale” signs on them in public road ditches.  “I don’t think we want that,” he says.

Here are Drazkowski’s comments on the House floor: