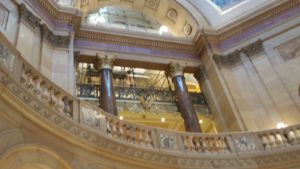 A tuition freeze next year at state-run two-year institutions and a one-percent cut the following year — a key feature of a three-plus billion dollar higher education funding bill the Minnesota House passed Tuesday. Fergus Falls Republican Bud Nornes says, “I’ve heard a lot about tuition increases and all that sort of thing. I’m not sure how that works, when this will be the sixth year in a row for a freeze for the two-year schools.”  Winona Democrat Gene Pelowski responds it’s the same thing the Minnesota State system did last time around: “In order to get the one percent cut the second year, they took it from the four-year universities and they moved it in their budgets,” meaning another tuition increase at four-year universities next year. But backers of the bill note there will be a tuition freeze the following year at state-run universities — but not the U-of-M which is a self-governing land grant institution.

The House bill encourages the University of Minnesota to drop tuition closer to the Big Ten average, but the legislature cannot mandate it and Pelowski says, “There will be tuition increases for the undergraduates in both years of the next biennium, and these will also add to student debt.”  Pelowski blames the House bill not providing enough funding for the U-of-M.