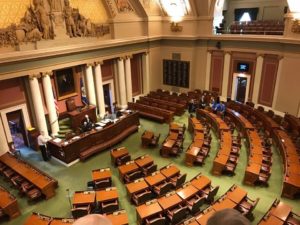 Republican House Speaker Kurt Daudt responds the governor has an “insatiable appetite for more spending.”  Daudt says the people who haven’t seen the benefit of the state’s budget surpluses are the same people who are responsible for them, and this time Republicans are going to invest back into Minnesota families “and we know that that’s gonna pay dividends in the future.”

Reducing the state income tax on Social Security benefits is the single largest chunk, $270 million, of the tax cut proposal.  Preston Representative Greg Davids says the bill helps seniors who are struggling the most.  He says, “Many, many more seniors are not going to have to declare 50 or 85 percent of their income from Social Security on their [Minnesota state income] taxes.” Davids says he’d like to get rid of the entire tax, but there are limits on how much can be budgeted.

Opponents of reducing the state tax on Social Security benefits says it helps higher-income people more than average Minnesotans. Republicans respond anyone who looks at their bill will realize that’s not so.

State taxes on cigarettes would be frozen at the current 3-dollars-four-cents a pack and automatic increases would be eliminated, under House Republicans’ tax cut plan.

Speaker Kurt Daudt  calls the current configuration of the cigarette tax “a big broken promise by the governor. So I know he wants to paint it as something other than what it is. It’s a tax on low-income Minnesotans.”  Backers of the cigarette tax argue it discourages Minnesotans — particularly young people — from smoking and thereby reduces the state’s health care costs.

Farmland would pay half the property taxes it currently does for school construction costs with the state picking up the difference, under a tax cut proposal Minnesota House Republicans rolled out Wednesday.

Mazeppa Representative Steve Drazkowski says many farmers are paying ten of thousands of dollars in property taxes on school bond referendums.  He says, “Certainly farmers throughout Minnesota are very supportive of their schools, but they’ve been placed in such a precarious position — very, very difficult.”

Drazkowski says House Republicans’ plan could reduce property taxes thousands of dollars on many farms. The plan appears to have broad bi-partisan support, including Governor Mark Dayton. The question is, will it be imperiled by other controversial tax cuts that Republicans have proposed and the governor opposes.