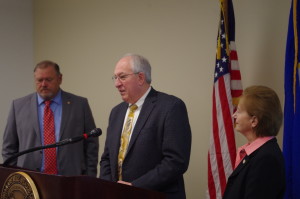 Minnesota Senate Democrats earmark a big part of their $1.5-billion bonding plan, unveiled today,  for transportation — about one-quarter of it, or nearly $400 million.

Democrats argue a gas tax increase is necessary for roads and bridges long term, but Republican House Speaker Kurt Daudt strongly opposes it. Senate Democratic Majority Leader Tom Bakk says he doesn’t intend to abandon his position that the state needs new revenue for roads and bridges, but given Daudt’s opposition to a gas tax increase, “maybe this is the best we can do.”

Although a transportation funding package looks unlikely, it’s also far from certain whether Republicans and Democrats will be able to agree on a bonding bill with three weeks left in the session.