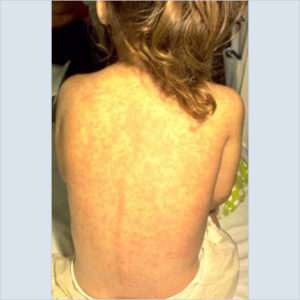 With 20 confirmed cases of measles — all Somali children in Hennepin County — officials are repeating that all children 12 months and older who have not had the measles/mumps/rubella vaccine should get it now, plus all adults who haven’t had measles. Kris Ehresmann with the State Health Department says usually the vaccine is given in two doses: at 12 to 15 months of age, and then another dose before a child starts school — but she says “because of the outbreak, we want to make sure that Somali Minnesotans — Somali children — get their second dose right now.”  Ehresman says it’s okay to accelerate the vaccine schedule, as long as the second dose is at least 28 days after the first.

Health Department officials say about half of the measles cases have required hospitalization.  Ehresman says it’s a serious disease.  “In 1990 when we had a large measles outbreak, about 460 cases in Minnesota, we had three deaths from measles,” she says.  “So it’s a disease we take very seriously.”

More in the interview with Ehresmann: