You are here: Home / News / Nearly 100 dogs rescued from unsanitary conditions in MN 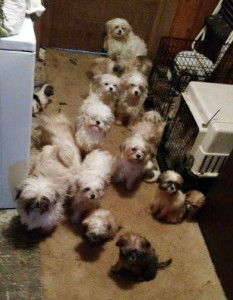 (Golden Valley, MN) — Officials have rescued nearly 100 dogs from filthy conditions in three separate locations in Minnesota. The Animal Humane Society removed 95 dogs from unsanitary conditions after a months-long investigation, which began with a tip to investigators back in August. The owners, who have moved from Stacy to Maplewood to Sandstone, have not been publicly identified. Many of the dogs are now in new homes, and those remaining are up for adoption.