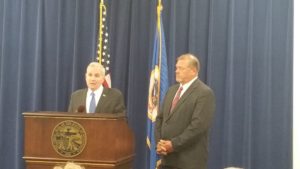 After nearly three months of futile efforts, Governor Dayton has decided not to call a special session to approve two key bills. One for state bonding projects, the other, a tax relief bill. The sticking point, funding for the Southwest Light Rail project. Dayton says Twin-Cities public transit projects are essential and would benefit the whole state:

House Speaker Kurt Daudt says there is too much uncertainty surrounding the Southwest rail project, including two pending lawsuits. Daudt says he was still willing to meet, however, and:

Daudt believes the bill is dead.  Governor Dayton says he’s not giving up, and plans to meet with the chair of the Metropolitan Council, to discuss options for Southwest Light Rail funding.