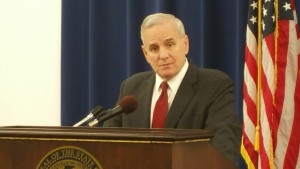 Negotiators for the Minnesota House and Senate meet this morning to try to move forward on a bonding bill for state construction projects, after Republicans’ proposal failed Thursday in the House — two weeks after Democrats’ plan went down to defeat in the Senate.  Governor Mark Dayton says he’s hopeful they come up with something in-between Republicans’ and Democrats’ numbers.  Dayton says, “It’s gonna need bipartisan support in both the House and Senate in order to pass, so it’s gonna have to meet a test of sufficiency in the view of House DFLers and a test of insufficiency in the view of some Senate Republicans.”  House Republicans upped their bonding number to 800 million dollars. Dayton proposed 1.4 billion dollars and Senate Democrats a hundred-million dollars over that. The deadline for lawmakers to act is midnight Sunday.