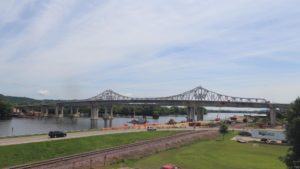 New Winona bridge in foreground with the historic structure behind

The new bridge over the Mississippi River at Winona opens to traffic later today after an official dedication this morning. MN-DOT’s Mike Dougherty says one great feature is a 12-foot-wide pedestrian and bike lane that’s separated from driving lanes, with two overlook bump-outs for people to stop and look. Dougherty says the concrete box-girder structure is designed to *not* diminish the sight-line for the original steel cantilever bridge, which will be renovated.

Today’s official dedication and opening of the new bridge at Winona also kicks off major renovations of the original steel cantilever bridge which opened in 1942. MN-DOT’s Mike Dougherty says they won’t know how long rehab will take until crews start taking sections apart and determine how much the bridge has deteriorated.  It was temporarily closed in 2008 when inspections found problems similar to those that caused the 35-W bridge to collapse.  The Winona bridge re-opened with weight restrictions after work to strengthen it was finished.  Dougherty says when the historic bridge renovation is complete in late 2019 or early 2020, traffic capacity will double across the Mississippi River at Winona.