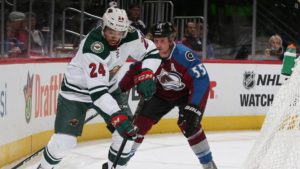 Not much has changed with the Minnesota Wild roster.

The biggest difference is the man now in charge on the bench, Bruce Boudreau, who’s been tasked with squeezing more success out of a team that’s been stuck in the early rounds of the playoffs for the last four years.

Boudreau has mostly experienced early exits from the postseason, too, with Washington and Anaheim. Without them, though, the 61-year-old likely wouldn’t have been available to Fletcher and the Wild in the search for the franchise’s fifth head coach and fourth in six years. They’re banking on Boudreau, with his remarkable regular season success of eight division titles in nine years, as the catalyst that this a group of players has been missing at critical times.

”You come to realize why he’s had success. Everything he says makes a lot of sense,” right wing Jason Pominville said. ”He kind of goes out of his way to make sure that we understand it and explains to us why we’re doing it and what can happen if we do it and do it right, so it’s nice to have that voice.”

With his roly-poly build and mischievous gap-toothed grin, Boudreau doesn’t look the part of a taskmaster. Make no mistake, though, that his practices have been demanding during the get-to-know-each-other phase during training camp.

”They are intense, a lot of skating, and you can tell there’s a purpose to all the drills we’re doing,” left wing Zach Parise said, noting the emphasis on teaching concepts and creating game-like situations. ”It kind of forces us to play at a faster pace in practices, and hopefully that translates into games.”

The Wild start the season at division rival St. Louis on Oct. 13. Their home opener is two days later against Winnipeg.

Here are some of the top storylines for 2016-17 in Boudreau’s first year with Minnesota:

PARISE RETURNS: Parise missed the playoff series last spring, a six-game loss to division champion Dallas, with a back injury that bothered him down the stretch and robbed the Wild of their best forward. Healthy enough to play for the U.S. team in the World Cup of Hockey, Parise will be counted on to be the emotional engine of a first line featuring center Marc Staal, one of the few notable offseason additions, and Charlie Coyle on the right wing.

CONVERTED CENTER: Coyle has gone back and forth between center and the wing, but the plan for now is to keep him and his 6-foot-3, 218-pound frame on the wing. Coyle had a career-high 21 goals and 42 points in 2015-16, but he was still prone to long stretches without scoring.

”So far we haven’t seen the peak of him,” Boudreau said. ”I think he’ll be better and when he’s better it makes all of us better.”

CONVERTED CENTER, PART TWO: Since making his debut as a 20-year-old in 2012-13, Mikael Granlund hasn’t matched the hype surrounding his talent with the same production. Granlund began to thrive on the wing during the postseason, and he’ll likely stay there on a line centered by captain Mikko Koivu and rounded out by Chris Stewart, the other significant free-agent acquisition.

DEFENSEMEN DEMANDS: Boudreau hired Hall of Fame defenseman Scott Stevens for his staff, bringing a hard-nosed guide for the blue-line group led by Parise’s pal, Ryan Suter. Stevens, who spent three years on New Jersey’s staff, was itching to get back on the bench after working for NHL Network last season.