You are here: Home / News / No special session on health insurance premiums before Christmas 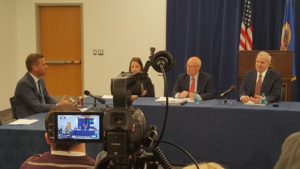 There will be no special session for health insurance premiums next week, after a meeting between Governor Mark Dayton and Republican House Speaker Kurt Daudt  broke up this afternoon after the two hurled accusations at each other. Daudt told reporters earlier today, “The governor’s actions have given me the ability to come to no other conclusion than to say the governor absolutely does not want a special session.”  Dayton responds Republicans tried to change the game at the last minute.  He says, “We’ve had a bill… for two months now that they’ve been looking at, and two weeks ago signed off on, and now we’re getting a proposal for changes… that would make the bill unworkable.”)

Speaker Daudt called this afternoon’s  meeting a “good show for the media.” The legislature goes into regular session in just over two weeks.