You are here: Home / News / Not enough, is response to Dayton apology for police fatal shooting of black man 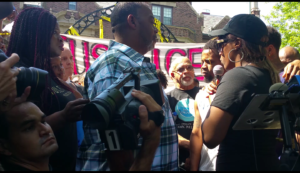 Not enough, was the response when Governor Mark Dayton apologized to the girlfriend of 32-year-old Philando Castile, who was shot and killed by an officer last night in Falcon Heights.  Dayton told Diamond Reynolds, “I can’t tell you how sorry I am for the terrible tragedy that’s been forced on you and on your family.” Reynolds responded, “I don’t want you guys to be sorry. I want you all to be more careful!” As protesters shouted, “We want justice,” Dayton said, “You will get justice. You want justice, you deserve justice, you’ll get justice.”  The governor has asked the White House for a U-S Justice Department investigation.