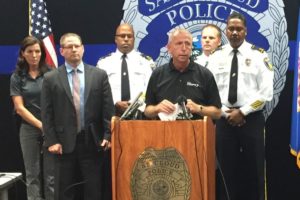 Governor Mark Dayton says President Obama called him this morning to express concern about the St. Cloud attack and offer any assistance needed. Dayton says the president also asked him to “convey his deep appreciation for the heroism of the police officer who stopped the attack.”

The governor is in Saint Cloud meeting with Mayor Dave Kleis and other local officials. Reporter Dan DeBaun says there’s a lot of tension in town, “both between the local Somali population and everybody else, the Somali population saying that they want to find unity and work together. They condemned the attack on Saturday night.”  DeBaun says a lot of people in St. Cloud still can’t believe what happened.