You are here: Home / News / Officer charged with manslaughter in shooting death of Philando Castile (with AUDIO) 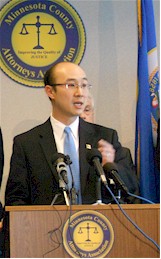 Ramsey County Attorney John Choi has filed charges against the officer who fatally shot Philando Castile during a traffic stop last summer.  Choi said in a morning news conference that he has concluded that the use of deadly force by St. Anthony Officer Jeronimo Yanez “was not justified and that sufficient facts exist to prove this to be true.”  Yanez faces charges of second-degree manslaughter, plus felony counts of discharge of a firearm that endangered Castile’s girlfriend Diamond Reynolds and her four-year-old daughter, who were also in the vehicle.  Officer Yanez’s first court appearance is Friday afternoon in Ramsey County.

In September the Bureau of Criminal Apprehension announced they’d completed their investigation into the shooting. Choi’s counterpart in neighboring Hennepin County, lead prosecutor Mike Freeman, did not utilize a grand jury and made the decision himself that charges would *not* be filed against officers involved in fatally shooting Jamar Clark.