You are here: Home / News / Officer who shot Philando Castile back on administrative leave 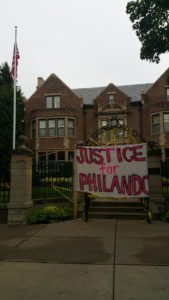 The officer who fatally shot Philando Castile is back on administrative leave.

Jeronimo Yanez had returned to work last week. A statement on the City of St. Anthony’s website says “the decision to change Officer Yanez’s status was made after reviewing concerns and other feedback from the community.  Out of respect to the sensitive nature of the tragic incident and the concerns from the community, the Mayor, City Council and City Manager have decided to make this change.” Officials say Yanez’s status with the department will be reviewed when the investigation of the incident is complete. Yanez pulled Castile over on July 6th for a traffic infraction then shot and killed him. Castile’s girlfriend live-streamed a video in the aftermath of the shooting.