You are here: Home / News / Officials announce $80M for affordable housing across Minnesota 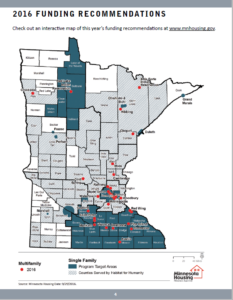 Minnesota officials today announced 80 million dollars in funding to create and preserve over 18-hundred affordable housing units across the state. Housing Commissioner Mary Tingerthal says almost 600 thousand Minnesota households pay more than 30 percent of their income for housing.  Tingerthal says, “What we try to do with our programs is help a few more families every year to really live in housing that they can afford not only today, but over the long run.”  She says 80 million dollars in state, federal and private funds will leverage 300 million dollars for affordable housing projects.

Among the multi-family projects: 28 units in Cambridge, 35 in Cloquet, 50 units in Mankato and 38 units in Austin.  There are also single-family housing projects in communities like Perham and Grand Marais.  The funding goes to projects across the state, but this year targeted areas are counties around the Red Lake Reservation in northwest Minnesota, 19 counties in southern and southeast Minnesota, plus the central Twin Cities.