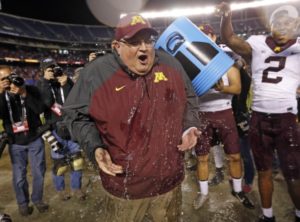 The University of Minnesota football team went 9-4, including a bowl victory this season, but head coach Tracy Claeys was fired, the school confirmed Tuesday.

Minnesota athletic director Mark Coyle, who came over from Syracuse in the offseason, said in November that Claeys would be back next season. He apparently changed his mind.

The suspension of 10 players as well as the team’s threat to boycott the Holiday Bowl as a result of the suspensions apparently played a major role in the firing.

Coyle released a statement regarding his decision to fire Claeys.

“I made a difficult decision today on behalf of the University of Minnesota. With the support of Board of Regents’ leadership and President Eric Kaler, I have decided to take the Gophers football team in a different direction with new coaching leadership,” Coyle said in his statement. “I determined that the football program must move in a new direction to address challenges in recruiting, ticket sales and the culture of the program. We need strong leadership to take Gopher football to the next level and address these challenges.

“This decision is about the future of Minnesota football. Moving forward, we need a leader who sets high expectations athletically, academically, and socially.

County officials declined to press charges against players for alleged sexual assault violations, but an internal investigation by the University of Minnesota’s Equal Opportunity and Affirmative Action (EOAA) office led Coyle to suspend 10 players from the team indefinitely on Dec. 13.

That’s when the players announced they would boycott all football activities, and they did for two days.

Claeys tweeted his support of the team’s boycott, and that move was “not helpful,” said Coyle.

Claeys told the team he would be fired if they did not play in the Holiday Bowl. Not only did the Gophers players compete, they beat Washington State 17-12.

After that game,  Coyle said in a statement that he and Claeys would “take this opportunity to reflect on this past season before sitting down together to talk about the future and my expectations for our football program.”

Minnesota players voiced their displeasure regarding the firing.

“I don’t know who would want to be a part of this program,” quarterback Mitch Leidner told ESPN’s Brett McMurphy.

An anonymous underclassman told McMurphy, “We don’t want to play for administration. Countless people will transfer if possible.”

Claeys became the Gophers’ head coach during the 2015 season, when Jerry Kill resigned for health reasons. Minnesota went 11-8, including two bowl victories, under Claeys. The nine wins this season were the most for Minnesota since it won 10 in 2003.